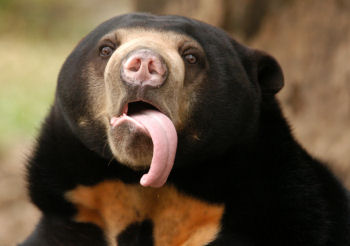 The Sun Bear (Helarctos malayanus) is a bear found primarily in the tropical rainforests of Southeast Asia.

The Sun Bear stands approximately 4 ft (1.2 m) in length, making it the smallest member in the bear family. It is often called the dog bear because of its small stature. It has a 2 in (5 cm) tail and on average weighs less than 145 lb (65 kg). Males tend to be slightly larger than females.

Unlike other bears, the Sun Bear’s fur is short and sleek. This adaptation is probably due to the lowland climates it inhabits. Dark black or brown-black fur covers its body, except on the chest where there is a pale orange-yellow marking in the shape of a horseshoe. Similar colored fur can be found around the muzzle and the eyes. This distinct marking gives the sun bear its name. 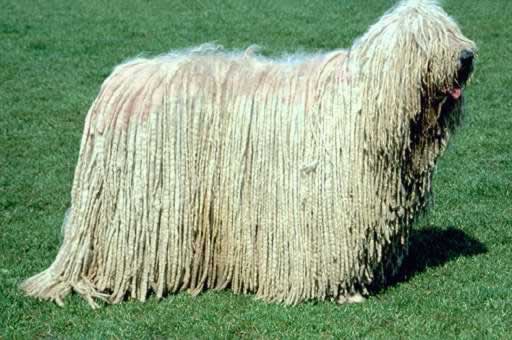 Females are 27 inches (69cm) at the withers. Male Komondorok are a minimum of 28 inches at the withers, but many are over 30 inches tall, making this one of the larger common breeds of dog. The body is not overly coarse or heavy, however, and people unfamiliar with the breed are often surprised by how quick and agile the dogs are.

Its long, thick, strikingly corded white coat (the heaviest amount of fur in the canine world) resembles dreadlocks or a mop. The puppy coat is soft and fluffy. However, the coat is wavy and tends to curl as the puppy matures. A fully mature coat is formed naturally from the soft undercoat and the coarser outer coat combining to form tassels, or cords. Some help is needed in separating the cords so the dog does not turn into one large matted mess. The length of the cords increases with time as the coat grows. Shedding is very minimal with this breed, contrary to what one might think (once cords are fully formed). The only substantial shedding occurs as a puppy before the dreadlocks fully form. The Komondor is born with only a white coat, unlike the similar-looking Puli, which is usually white, black or sometimes grayish. However, a working Komondor’s coat may be discolored by the elements, and may appear off-white if not washed regularly. 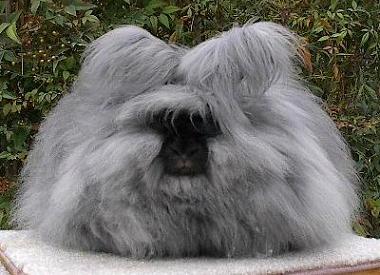 The Angora rabbit is a variety of domestic rabbit bred for its long, soft hair. The Angora is one of the oldest types of domestic rabbit, originating in Ankara, Turkey, along with the Angora cat and Angora goat. The rabbits were popular pets with French royalty in the mid 1700s, and spread to other parts of Europe by the end of the century. They first appeared in the United States in the early 1900s. They are bred largely for their long wool, which may be removed by shearing or plucking (gently pulling loose wool).

There are many individual breeds of Angora rabbits, four of which are ARBA recognized. Such breeds include, French, German, Giant, English, Satin, Chinese, Swiss, Finnish, to name a few. 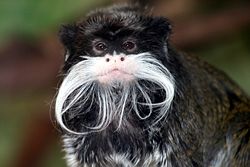 The Emperor Tamarin (Saguinus imperator) is a tamarin allegedly named for its similarity with the German emperor Wilhelm II. The name was first intended as a joke, but has become the official scientific name.
This tamarin lives in the southwest Amazon Basin, in east Peru, north Bolivia and in the west Brazilian states of Acre and Amazonas.
The fur of the Emperor Tamarin is predominantly grey colored, with yellowish speckles on its chest. The hands and feet are black and the tail is brown. Outstanding is its long, white mustache, which extends to both sides beyond the shoulders. The animal reaches a length of 24 to 26 cm, plus a 35 cm long tail. It weighs approximately 300 to 400 g.
This primate inhabits tropical rain forests, living deep in the forest and also in open tree-covered areas. It is a diurnal animal, spending the majority of its days in the trees with quick, safe movements and broad jumps among the limbs. 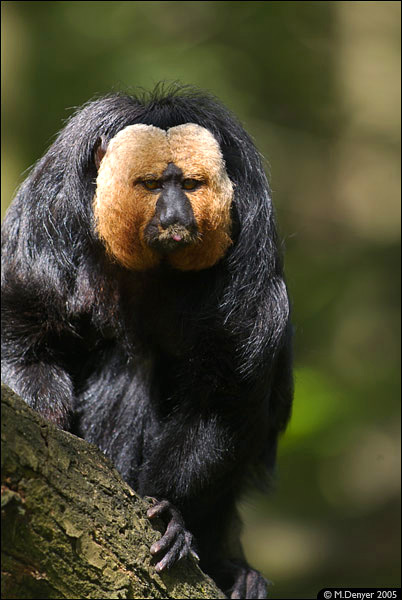 The White-faced Saki (Pithecia pithecia), also known as the Guianan Saki and the Golden-faced Saki, is a species of saki monkey, a type of New World monkey, found in Brazil, French Guiana, Guyana, Suriname, and Venezuela. This monkey mostly feed on fruits, but also nuts, seeds, and insects. 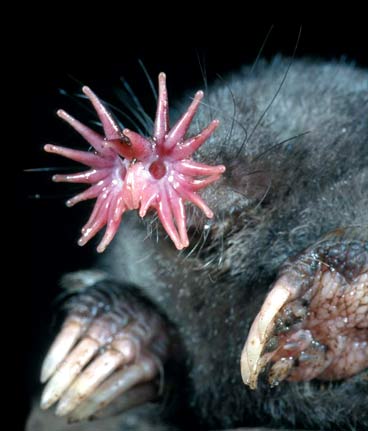 The Star-nosed Mole (Condylura cristata) is a small North American mole found in eastern Canada and the north-eastern United States. It is the only member of the tribe Condylurini and the genus Condylura.

It lives in wet lowland areas and eats small invertebrates, aquatic insects, worms and molluscs. It is a good swimmer and can forage along the bottoms of streams and ponds. Like other moles, this animal digs shallow surface tunnels for foraging; often, these tunnels exit underwater. It is active day and night and remains active in winter, when it has been observed tunnelling through the snow and swimming in ice-covered streams. Little is known about the social behavior of the species, but it is suspected that it is colonial.

The Star-nosed Mole is covered in thick blackish brown water-repellent fur and has large scaled feet and a long thick tail, which appears to function as a fat storage reserve for the spring breeding season. Adults are 15 to 20 cm in length, weigh about 55 g, and have 44 teeth. The mole’s most distinctive feature is a circle of 22 mobile, pink, fleshy tentacles at the end of the snout. These are used to identify food by touch, such as worms, insects and crustaceans. 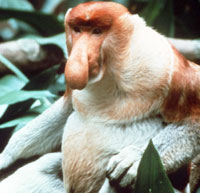 Nasalis larvatus also known as Long-nosed Monkey is a reddish-brown arboreal Old World monkey. It is the only species in monotypic genus Nasalis.

The most distinctive trait of this monkey is the male’s large protruding nose. The purpose of the large nose is unclear, but it has been suggested that it is a result of sexual selection. The female Proboscis Monkey prefers big-nosed male, thus propagating the trait.

The Proboscis Monkey also has a large belly, as a result of its diet. Its digestive system is divided into several parts, with distinctive gut flora, which help in digesting leaves. This digestive process releases a lot of gas, resulting in the monkey’s “bloated” bellies. A side-effect of this unique digestive system is that it is unable to digest ripe fruit, unlike most other simians. The diet consists mainly of fruits, seeds and leaves. 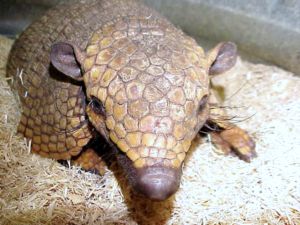 The Pink Fairy Armadillo (Chlamyphorus truncatus) or Pichiciego is the smallest species of armadillo (mammals of the family Dasypodidae, mostly known for having a bony armor shell). It is approximately 90-115 mm (3?-4?”) long excluding the tail, and is pale rose or pink in color. It is found in central Argentina where it inhabits dry grasslands and sandy plains with thorn bushes and cacti. It has the ability to bury itself completely in a matter of seconds if frightened.

The Pink Fairy Armadillo burrows small holes near ant colonies in dry dirt. It feeds mainly on ants and ant larvae near its burrow. Occasionally it feeds on worms, snails, insects and larvae, or various plant and root material. 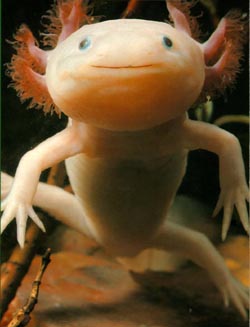 The Axolotl (or ajolote) (Ambystoma mexicanum) is the best-known of the Mexican neotenic mole salamanders belonging to the Tiger Salamander complex. Larvae of this species fail to undergo metamorphosis, so the adults remain aquatic and gilled. The species originates from the lake underlying Mexico City. Axolotls are used extensively in scientific research due to their ability to regenerate most body parts, ease of breeding, and large embryos. They are commonly kept as pets in the United States, Great Britain, Australia, Japan (where they are sold under the name Wooper Rooper, and other countries.

Axolotls should not be confused with waterdogs, the larval stage of the closely related Tiger Salamanders (Ambystoma tigrinum and Ambystoma mavortium), which is widespread in much of North America which also occasionally become neotenic, nor with mudpuppies (Necturus spp.), fully aquatic salamanders which are unrelated to the axolotl but which bear a superficial resemblance. 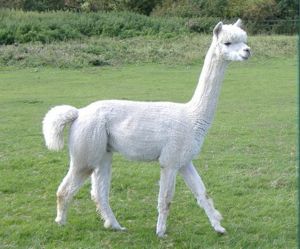 The Alpaca (Vicugna pacos) is a domesticated species of South American camelid developed from the wild alpacas. It resembles a sheep in appearance, but is larger and has a long erect neck as well as coming in many colors, whereas sheep are generally bred to be white and black.

Alpacas are kept in herds that graze on the level heights of the Andes of Ecuador, southern Peru, northern Bolivia, and northern Chile at an altitude of 3500 to 5000 meters above sea-level, throughout the year.

Alpacas are considerably smaller than llamas, and unlike them are not used as beasts of burden but are valued only for their fiber. Alpacas only have fleece fibers, not woolen fibers, used for making knitted and woven items much as sheeps wool is. These items include blankets, sweaters, hats, gloves, scarves, a wide variety of textiles and ponchos in South America, and sweaters, socks and coats in other parts of the world. The fiber comes in more than 52 natural colors as classified in Peru, 12 as classified in Australia and 22 as classified in America.

The Shoebill, Balaeniceps rex also known as Whalehead is a very large bird related to the storks. It derives its name from its massive shoe-shaped bill.

The Shoebill was added rather recently to the ornithological lists; the species was only discovered in the 19th century when some skins were brought to Europe. It was not until years later that live specimens reached the scientific community. The bird was known to both ancient Egyptians and Arabs however. There exist Egyptian images depicting the Shoebill while the Arabs referred to the bird as abu markub, which means one with a shoe. Clearly, this refers to the striking bill. 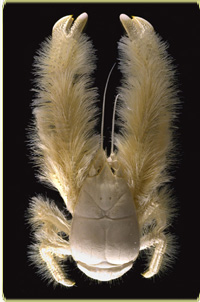 Kiwa hirsuta is a crustacean discovered in 2005 in the South Pacific Ocean. This decapod, which is approximately 15 cm (6 inches) long, is notable for the quantity of silky blond setae (resembling fur) covering its pereiopods (thoracic legs, including claws). Its discoverers dubbed it the “yeti lobster” or “yeti crab”[2].

K. hirsuta was discovered in March 2005 by a group organised by Robert Vrijenhoek of the Monterey Bay Aquarium Research Institute in Monterey, California, using the submarine DSV Alvin, operating from RV Atlantis[3]. The discovery was announced on the 7th of March, 2006. It was found 1,500 km (900 miles) south of Easter Island in the South Pacific, at a depth of 2,200 m (7,200 feet), living on hydrothermal vents along the Pacific-Antarctic Ridge[4]. Based on both morphology and molecular data, the species was deemed to form a new genus and family (Kiwaidae). The animal has strongly reduced eyes that lack pigment, and is thought to be blind.

The ‘hairy’ pincers contain filamentous bacteria, which the creature may use to detoxify poisonous minerals from the water emitted by the hydrothermal vents where it lives. Alternatively, it may feed on the bacteria, although it is thought to be a general carnivore. Its diet also consists of green algae and small shrimp.