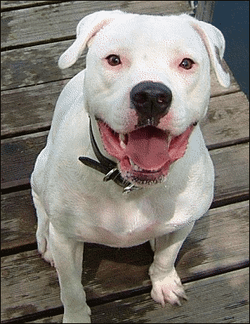 Dogs pant a lot because they have no sweat glands on their body except at their paws.
More people are killed by dogs, than by bears and sharks combined.
A dog’s nose print helps investigators identify dogs. It works like a human finger print.
Over ½ of dog owners sign their dog’s name on greeting cards.
Despite their breed or size, all dogs have 42 teeth and 321 bones—all breeds.
A dog’s heart beats at 120 times/minute; that is 150% compared to the human heart which beats at 80 times/minute.
AKC has 161 breeds of dogs.
Chocolate and Dogs
Why is chocolate poisonous to dogs? Cocoa beans contain theobromine—a stimulant that can affect the dog’s heart and its nervous system. It can cause dogs to have seizures, can make them sick, and can even kill them. If a dog is intoxicated from theobromine, the first symptom would be diarrhea and vomiting. A dog can be intoxicated from anything that has cocoa beans.

Origin and History of Dog Breeds
Beagles
Beagles were used in the 16th century to catch rabbits during hunting games.
Boxers
Boxers were bred in Germany in the 19th century from several breeds including English Bulldog. Boxers were bred for hunting, especially having the ability to chase deer, boars, and bison and hold them until hunters arrive. Later boxers were used for dog fighting.
Border Collies
Border Collies were bred between England and Scotland (thus getting their name as “border” between two countries) to be shepherds’ dogs. They have proven to be one of the best shepherds’ dogs because of their ability to work long hours and complete tasks on their own without the shepherd’s presence.
Bulldogs
Bulldogs today are different from the original Bulldogs during the 16th century. The original Bulldogs were used in sports games to attack bulls. Today’s Bulldogs are much shorter and gentler!
Chihuahuas
Chihuahuas’ origin is uncertain, but what we know is that it came from Mexico and it is named after the state of Chihuahua, in Mexico.
Cocker Spaniel
Cocker Spaniel was bred to be a hunting dog, and dates as back as the 14th century.
Collies
Collies were bred in England to be a shepherd’s dog.
Dachshunds
Dachshunds were bred in Germany in the 17th century to fight badgers in badgers’ burrows. Their stretched out bodies can fit through the burrows.
Dalmations
Dalmatians were used as guard dogs during wars (gaining the title “dogs of war”). They were also used as fire-apparatus followers, following and coaching horse drawn fire engines (a job that gave them the firehouse mascot in the United States). Dalmatians also served as hunting dogs. There is no certain information about their origin, though some believe that they originated in Dalmatia, used to be a province of Austria, but is now in Croatia.
Doberman
Doberman was bred in Germany in the 19th century by Louis Doberman. Mr. Doberman used several breeds including Greyhound and Rottweiler to develop the perfect guard dog.
German Shepherds
German Shepherds originated in Germany in 1899 to be a herding dog. Later they became a popular police dogs because of their strength and intelligence.
Golden retriever
Golden retriever was bred in Scotland for hunting.
Great Danes
Great Danes might have originated in Rome, Greece, England, Denmark, or Germany—nothing is certain.
Greyhounds
Greyhounds might have originated 100s or even 1,000s of years BC. A sculpture in an Egyptian tomb dating to 4,000 BC showed a Greyhound dog. There are also records of Greyhounds used by the Celts as hunting dogs about 500 BC. Today they are race dogs that can run at a speed of about 40 mph.
Labrador retriever
Labrador retriever was bred in Newfoundland and Labrador (a Canadian province) to aid fishermen in pulling their nets.
Poodles
Poodles most likely originated in France, but they may have originated in Germany or Russia. The word “poodle” or “pudle” is a German word meaning puddle. The name was given since the Poodle was bred to be a water dog helping hunters.
Rottweiler
Rottweiler, named after a southwest German town Rottweil, was used for herding and also for a war dog. Roman soldiers also used the breed to herd their cattle. The breed almost became extict, until it was revived in the 20th century. Rottweilers were used during both World Wars as war guard dogs.
Shih Tzu
Shih Tzu, a Chinese bred dog, has existed for one thousand years and was a famous pet for the Ming Dynasty.
Yorkshire Terrier
Yorkshire Terrier, named after the English city Yorkshire, was bred in the 19th century to hunt and kill rats in factories.